Who would you rather have as your coach?

I’ll tell you why I’d rather be trained by the current me versus the then me:

Because I’m a better trainer.

Because I have a life, filled with wonderful things, (that aren’t all fitness related) just like you.

Because the woman on the left wasn’t being real with anyone, let alone herself.

January is rapidly approaching, and you are about to be bombarded with photos JUST like the one on the left. And they’re not real life. They’re simply snapshots in time. As women with more important qualities to offer the world, we shouldn’t strive to achieve this because the process can destroy us. And I should know; it happened to me.

This time eight years ago, my life was quite different. I had allowed the idea of perfection to rule my life. It all started in 2008 when I really became serious about personal training in Boston. Back then, I felt invisible in the sea of others pursuing the same career. Somehow the men in the industry could easily be admired for their knowledge, while carrying around a few extra pounds and a penchant for booze and shitty food. Nothing was ever mentioned about looking and acting the part. The polar opposite was true for women. The majority of women who had a following in fitness all had one thing in common: they had all used their bodies as a way to somehow prove their worth.

As a young twenty-something, I thought that maybe, just maybe, if I “looked the part,” something would change in my favor and I could be recognized for my brains.

Through the pursuit of the perfect body, I ended up hitting my rock bottom. I still vividly remember being in the shower at a friend’s house and wanting to end my life.  Weeks earlier, standing at 5 feet 7 inches and all of 119 pounds, I had just won my esteemed Professional Card as a figure competitor.

That day, in shower, just three short weeks later, I had ballooned up 25 pounds and had cellulite on my arms. My hair was falling out, my whole body ached, and my heart was empty. I quit my job and contemplated leaving the fitness industry altogether. I spent the majority of the next few months in bed.

“Your pain is the breaking of the shell that encloses your understanding.”

Such words have never rang more true. These experiences have shaped me a woman and as a coach, and have transformed my message and purpose. I will NEVER EVER lead another woman down the path of self-destruction in order to achieve “a goal.” Even the seemingly healthy goal of attaining a lean physique through another fitness professional’s guidance can be dangerous. My goal as a coach over the past eight years has been the complete opposite.

Through SMART STRENGTH 2.0 GYM EDITION and sustainable nutrition, the time and effort invested won’t be lost. Instead, I will continue leading other women in the right direction, and helping them gain the knowledge and understanding of their own bodies so that they can feel incredible, all the time.

It took some very hard times to realize that I already had everything that I was looking for. I searched for outside approval, sacrificed my own beliefs as well as my body, until I almost lost everything that was important to me. My advice to everyone out there is that you already have everything you need within you.

All of my experiences, personally and professionally, have influenced my coaching. This January 2019 I am releasing a new 10-Week strength training program that will teach you how to strength train at the gym. If you completed Smart Strength, or have ever wanted to work with me, but money, distance or time was an obstacle, then give Smart Strength 2.0 GYM EDITION is for you.

P.S. Signups are officially open for my January Nutrition Coaching Program. There’s no meal plan. No forbidden foods. Just a sustainable way to eat for the rest of your life. 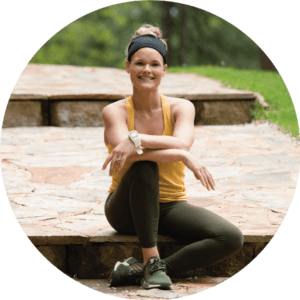 I have a passion for helping women feel strong + confident AF in the body they were given. There is no such thing as TMI when it comes to being a woman, being a mother or my mental health. I swear too much for some people and I am ALWAYS sporting a headband, a coffee and a soda water.

New on the blog